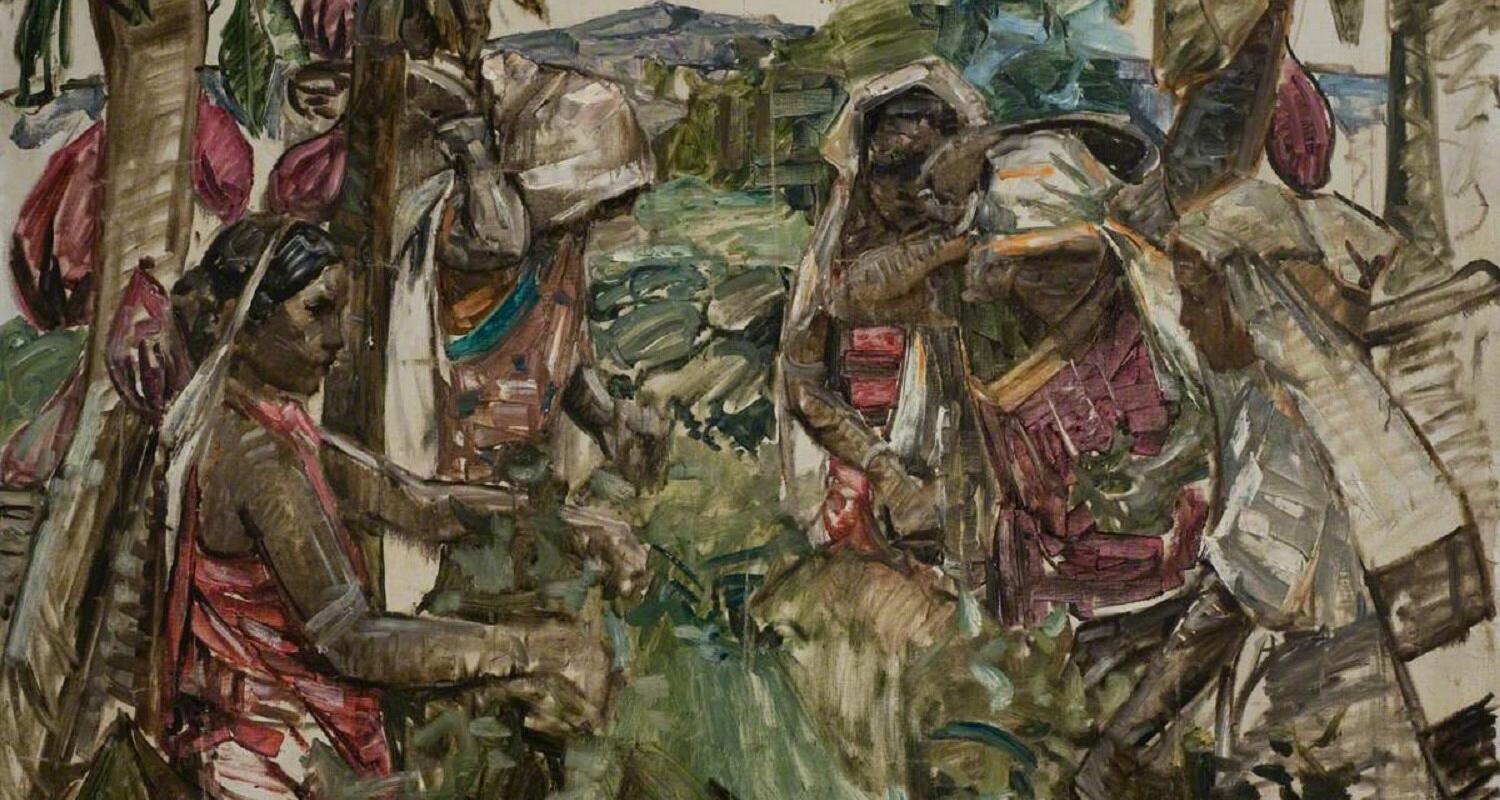 Fascinated by foliage and the Far East, Edward Atkinson Hornel (1864-1933) paints paradise with photographic precision – but the camera never lies.

- a review by Jelena Sofronijevic

From Camera to Canvas is one of the first exhibitions to stage Hornel’s oil paintings in dialogue with their original photographic studies. Stark contrasts reflect the enduring gulfs between Western gazes on East Asia, and often unpalatable realities.

One of the Glasgow Boys, Hornel fused French modernism with Celtic and Asian themes. Alongside George Henry, he first visited Japan in the mid-1890s. The pair returned card-carrying members of the Photographic Society of Japan, suitcases stuffed with slender, vertical Yokohama shashin, or commercial tourist photographs. Henry stayed home, as Hornel pursued new subjects in the thick greenery of Sri Lanka and Myanmar (then colonies of Ceylon and Burma).

Hornel collected poses as an entomologist does insects, perfectly preserved behind glass and print. Seizing his superior sexual, colonial, and artistic status, he photographed young, submissive women in varying states of undress, often subjecting them to physical manipulation. His human models became nothing more than interchangeable hands, feet, and faces, to be patched together through paint.

Hornel’s home of Broughton House in Kirkcudbright maintains over 1700 such photographs (and a Japanese garden). This collaboration between the National Trust for Scotland and the City Art Centre features only a handful. But even this condensed photographic ‘library of limbs’ makes for an eerily comprehensive slideshow.

From Camera to Canvas opens at a time of cultural reckoning, as a recent report finds that one-third of National Trust properties have direct colonial connections. The organisation has committed to more fully representing these histories, sparking backlash from those fearing ‘woke’ revisionism.

But this exhibition is a model for exhibiting the past. Placing these photographs and paintings next to - or on top of - each other exposes layers of complex representations. With little textual guidance, the viewer must navigate reality and depiction, and their own assumptions, for themselves.

Hornel blends (or rather, fades) women and non-white subjects into their backgrounds. Blink, and you’ll mistake the innocent faces of In the Orchard (1898) for scattered daisies, the brown bodies of his Ceylonese Tea Pickers (1907-1909) for forest trunks, or the ivory hats of the Three Japanese Peasants (1921-1925) for snow-capped Mount Fujis. Often, it is impossible to tell where the background ends and foreground begins.

Lost within their natural settings, Hornel’s subjects are diminished to an animal status. Artificial colouring and thick, bold brushwork reflect his perception of their exotic or provincial essence. His paintings retain the prejudices of ‘physical type’ photography, categorising colonial subjects into simplistic groups.

Indeed, artists of colonial and foreign subjects often doubled as deft interpreters for domestic audiences. And Hornel’s early use of thick impasto – decorative patterns and strong colour – may tempt us to lump him under japonaiserie.

But even Van Gogh, who studied with Hornel’s own teacher, never left Europe or directly experienced ‘otherness’. From Japan in 1893, Henry disappointedly wrote ‘at home one gets a mistaken idea as to the dress of the Japs. Really they dress very plain and in very quiet colour’. Perhaps Hornel owes more to fellow traveller Gauguin, who swaddled his Tahitian teens in lurid dress, not their traditional calico.

Unlike his post-Impressionist forebears, Hornel’s photographic command of oil is what makes his work distinct – and dangerous. Observed alone, his realistic depictions might fool you into their fantasy.

He fuses subject and setting, to create a non-specific, exotic ‘other’. Take Water Carriers on the Banks of the Irrawaddy (1923), Hornel’s typical representation of Myanmar. But the titular river is fabricated from images collected in Sri Lanka and Japan. The vertical layout is reminiscent of Hornel’s treasured shashin. And one Water Carrier is a Japanese model, her skin simply painted brown.

His Three Japanese Peasants dance beneath (uncharacteristically dark) mountains. But they may just as easily blend into a Breton boogie, or a dank corner in Van Gogh’s The Potato Eaters. And these three individuals are actually the same model differently posed. Again, Hornel assumes his subjects are nothing but cultural cut-and-pastes – like limbs, interchangeable and dispensable.

This exhibition literally layers competing narratives, showing the real complexities behind Hornel’s perfectly blurred utopias. Read today, they offer a lens not on ‘exotic’ cultures, but how cultures were – and continue to be – exotified in art.

For more on From Camera to Canvas, listen to curator Ben Reiss on E. A. Hornel’s Ceylonese Tea Pickers, in the latest episode of EMPIRE LINES.

Jelena Sofronijevic (@jelsofron) is an audio producer and freelance journalist, who makes content at the intersections of intercultural political history and the arts. They are the producer of EMPIRE LINES, a podcast which uncovers the unexpected flows of Empires through artworks. Published by the Political Studies Association, their undergraduate dissertation uses contemporary political satires to uniquely unpack Tito’s socialist Yugoslavia. They also presented an episode of BBC Radio 4’s Four Thought (September 2020) on modern Yugoslav diasporic identity, later selected for BBC Radio 4’s Pick of the Week and featured on BBC Radio Shropshire. Their other projects include The Arts Show, INDIAscussion, and Liberating Sustainability.