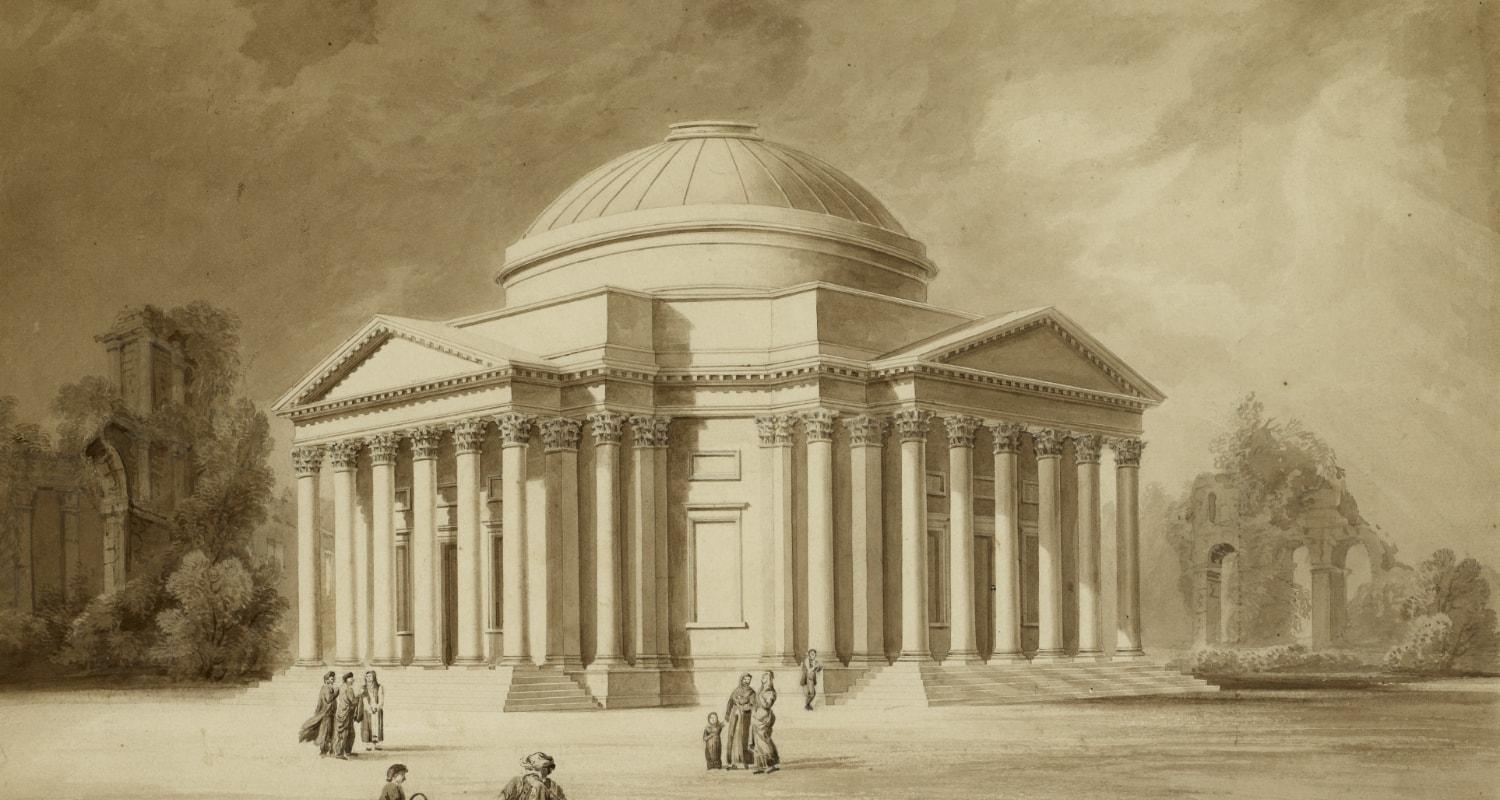 Press Release: Playfair and the City

Rarely seen drawings from the architect responsible for shaping Edinburgh’s celebrated cityscape will go on display in a new exhibition at the City Art Centre.

Around 50 drawings from William Henry Playfair’s practice, including plans for some of Edinburgh’s most famous landmarks complemented by images made by 19th Century painters showing some of his most well-regarded buildings have been gathered from the University of Edinburgh’s Department of Architectural History and its Centre for Research Collections, Historic Environment Scotland and the City of Edinburgh Council’s permanent collection to create this exhibition.

Playfair (1790 – 1857) is considered one of Scotland’s most prolific Georgian architects. His contribution to the architecture of early 19th century Edinburgh is found in many of the city’s most famous buildings, including Old College and New College, Donaldson’s School, George Heriots, the Scott Monument, Surgeon’s Hall, the Assembly Hall on the Mound and the City’s Observatory on Calton Hill.

Through his career Playfair addressed some of the key ideas around aesthetics, classics, society and politics, and their relationship with architecture and the urban realm.

His move from neo-Classical to neo-Gothic buildings demonstrates how Playfair and his architectural practice were engaged in shaping Edinburgh as a developing, working city as it entered the rapidly industrialised Victorian age, signifying his vision and ambition for Edinburgh as a place of significance within the British Isles.

The show is curated by Dr Kirsten Carter McKee and John Lowrey from the University of Edinburgh’s Department of Architectural History. It runs from 11 November 2017 to 25 February 2018 and entrance is free.

Councillor Donald Wilson, Culture and Communities Convener, said: “Almost anywhere you turn in Edinburgh, look up and you are likely to see Playfair’s magnificent monuments, domes, spires and structures scattering the skyline. “Drawing on his designs and the artwork in the Council and University archives, this free exhibition maps Playfair’s built and unbuilt ideas and the impact he had on Edinburgh.

'It is thanks to his vision that Edinburgh earned its ‘Athens of the North’ title, with his breath-taking City Observatory one of his earliest projects. See the architectural drawings at the City Art Centre, as we work with the Collective to return the building to Playfair’s original design.'

The exhibition coincides with the ongoing restoration of one of Playfair’s most iconic designs, the City Observatory on Calton Hill. This exciting project, undertaken by Collective Gallery in partnership with the City of Edinburgh Council, will see the building restored to Playfair’s original design, the creation of a new contemporary gallery space, and a restaurant overlooking the city.

Dr Kirsten Carter McKee, Curator of Playfair and the City and Research and Teaching Fellow in Architectural History at University of Edinburgh said: 'It is through Playfair’s understanding of the broader context of the city landscape that the true mastery of his skill becomes apparent. Playfair and the City explores this through the layout of Edinburgh’s Third New Town to the north of the city, which includes the urban parkland of Calton Hill. This vision and ambition in both Playfair’s architecture and his exploitation of the city landscape aimed to place Edinburgh as a city of style and significance within the British Isles.  Playfair’s role as an architect of significance in the 19th century therefore extends outside of Edinburgh, and places him within the realm of the British architectural greats of the late Georgian period.'

David Patterson, Curatorial and Conservation Manager with Museums and Galleries Edinburgh commented: 'this is a unique opportunity to see the work of one of Scotland’s most influential architects. Without doubt William Playfair left his mark on the appearance of Edinburgh in a way which no other single architect had done previously or has done since.'

Showing alongside Playfair and the City are three exhibitions: Songs for Winter: Pauline Burbidge & Charles Poulsen (4 November to 4 March), A Fine Line (18 November to 18 February 2018) and Hidden Gems (until 13 May 2018).

Learning and Programmes:
As ever, the City Art Centre is offering guided tours of its exhibitions on Fridays and Saturdays at 3pm. Accompanying the show is also an exciting events programme. For further information, please contact Margaret Findlay, Public Programmes Manager on 0131 529 3963 or by email margaret.findlay@edinburgh.gov.uk

Playfair and the City Events Programme:

This lecture by Professor Richard Rodger, Professor of Economic and Social history at the University of Edinburgh, explores the reasons why Edinburgh residents, and Scots in general, lived in high rise buildings.

City Art Centre
The City Art Centre is one of Edinburgh’s main public art galleries. It is owned and managed by the City of Edinburgh Council. It is home to the City’s collection of historic and contemporary Scottish art, one of the best in the country. The gallery hosts a vibrant programme of exhibitions from its collection and by contemporary local, national and international artists and makers.

For further details on the Calton Hill renovation, please contact: