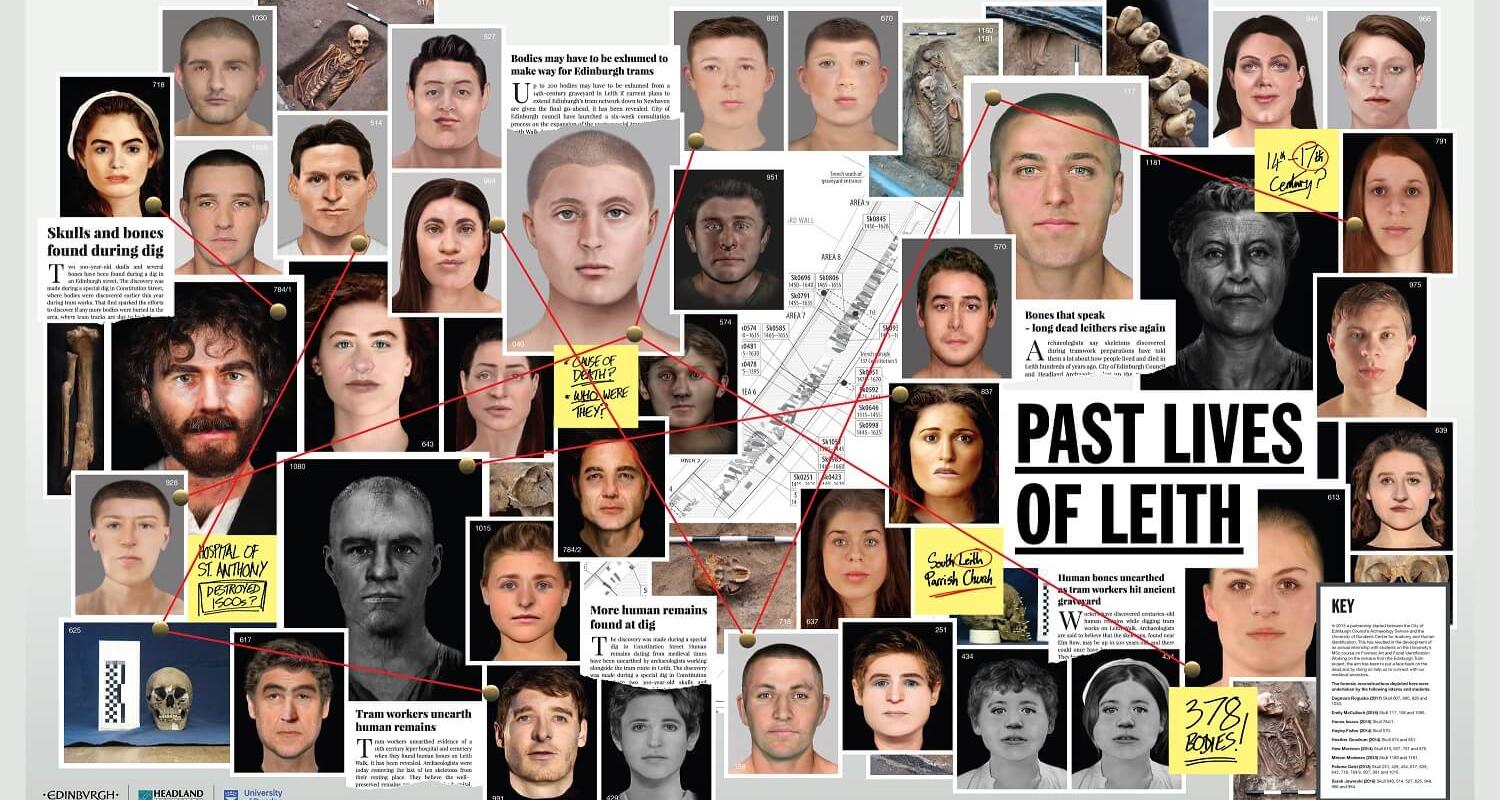 Press Release: The Past Lives of Leith

EXPLORE THE 'PAST LIVES OF LEITH' IN THE MUSEUM OF EDINBURGH

Visitors to the Museum of Edinburgh can now explore the results of the largest excavation of a medieval graveyard undertaken in Edinburgh.

“Past Lives of Leith”, which delves into the fascinating work carried out by experts from Headland Archaeology and the City of Edinburgh Council, opens to the public today (Friday 29 March).

Following the discovery in 2008 of medieval burials outside Leith Parish Church, a six-month archaeological excavation was carried out in 2009 in advance of the then expected construction of the Edinburgh Tram line to Leith and Newhaven. In total, these excavations recovered the remains of 378 people and provided a window into life in Leith from the 14th to the mid-17th centuries, rewriting part of the local history of the area.

Key findings that can be explored in the exhibition include:

The excavations -  how the discovery happened
Historic background - how the excavation site fits into the history of Leith
Who was buried in Constitution street? How the analysis reveals key facts about their age, sex, build and pathology
How were they buried? How the different forms of burials discovered led to clues about social status and how they may have died
Isotope analysis: how scientific analysis was used to discover more about where the people buried were from and even details about what they ate
New dating for the graveyard: how the uncovered remains, which precedes the South Leith Parish Church graveyard, changes what we know about the history of the area.

The exhibition also showcases the work undertaken by the Council and colleagues from the Centre for Anatomy and Human Identification at the University of Dundee to bring this historic find to life, through the process of forensic facial reconstruction to depict the faces of the 14th to 17th century remains. Visitors can now see what the Medieval residents of the former burgh might have looked like 600 years ago.

Councillor Donald Wilson, Culture and Communities Convener, said: “Spanning 10 years of painstaking archaeological fieldwork and scientific analysis, cutting through seven centuries of Scottish life and times, this exhibition and book explain how the Edinburgh Trams project altered our understanding of the area’s history and its inhabitants.

“The work here is a fascinating look at our ancestors, with nearly 400 human remains found. The work carried out by our archaeologist, Headland Archaeology and Dundee University has meant we can now get not only an idea of how these medieval residents might have looked, we are also able to determine how old they were, if they were local and even how they died. I would encourage anyone with an interest in the history of our capital to pay the exhibition a visit. This is a fascinating insight into a little-known piece of our people’s history.”

Julie Franklin from Headland Archaeology said: “Leith has persevered through sieges, famines, economic hardships and endless plagues. Weaving the sometimes harrowing, sometimes surprising story of the town and those who lived and died in it from the many strands of evidence has been a fascinating process.”

John Lawson, City of Edinburgh Council Archaeologist, added: “Leith and the surrounding area has a rich archaeological history. These excavations have unearthed a cemetery thought to date from the 14th to the 17th centuries. The discoveries of these burials in this location, although always a possibility, was nevertheless a surprise.

“This exhibition and publication of the book is a conclusion to a fascinating project which has truly changed what we thought we knew about the history of Constitution Street and the inhabitants of Leith. It has allowed us to highlight the lives of the ordinary person, by putting a face to these individuals and showing how they lived and died. Allowing us to compare and contrast with findings across Scotland and the UK.

“The forensic reconstructions have really helped to identify these remains as those of members of the public, rather than merely deeming them as archaeological findings, and how alike they are to modern day inhabitants of Leith and Edinburgh.

“Additionally, the project allowed us to develop important partnerships with the Universities of Dundee and Aberdeen, which led to further areas of collaborative work and research into the former inhabitants of Edinburgh – such as the 3D reconstructions on display in our exhibition.”

Dr Christopher Rynn from the University of Dundee said: “This project has provided an abundance of MSc projects and graduate internship placements for the MSc Forensic Art over the last few years and it is fantastic to see the work of so many individuals come together. Using forensic techniques of facial approximation and reconstruction, in combination with archaeological evidence and artefacts, individuals can be depicted in a way that provides a human, interpersonal element and some context on their lives.”

The accompanying book “Past Lives of Leith” written by Julie Franklin, Carmelita Troy, Kate Britton, Donald Wilson and John A Lawson is available to buy for £35.00 through Museums & Galleries and expands on the fascinating history discovered and findings from the decade-long archaeological investigation.

We're leading the way by offering fully-automated online services to our residents, whenever and wherever they need them.
Find out more at www.edinburgh.gov.uk/request

Download our pics free from:
www.flickr.com/photos/edinburghcouncil
Council Information and news releases are available on www.edinburgh.gov.uk