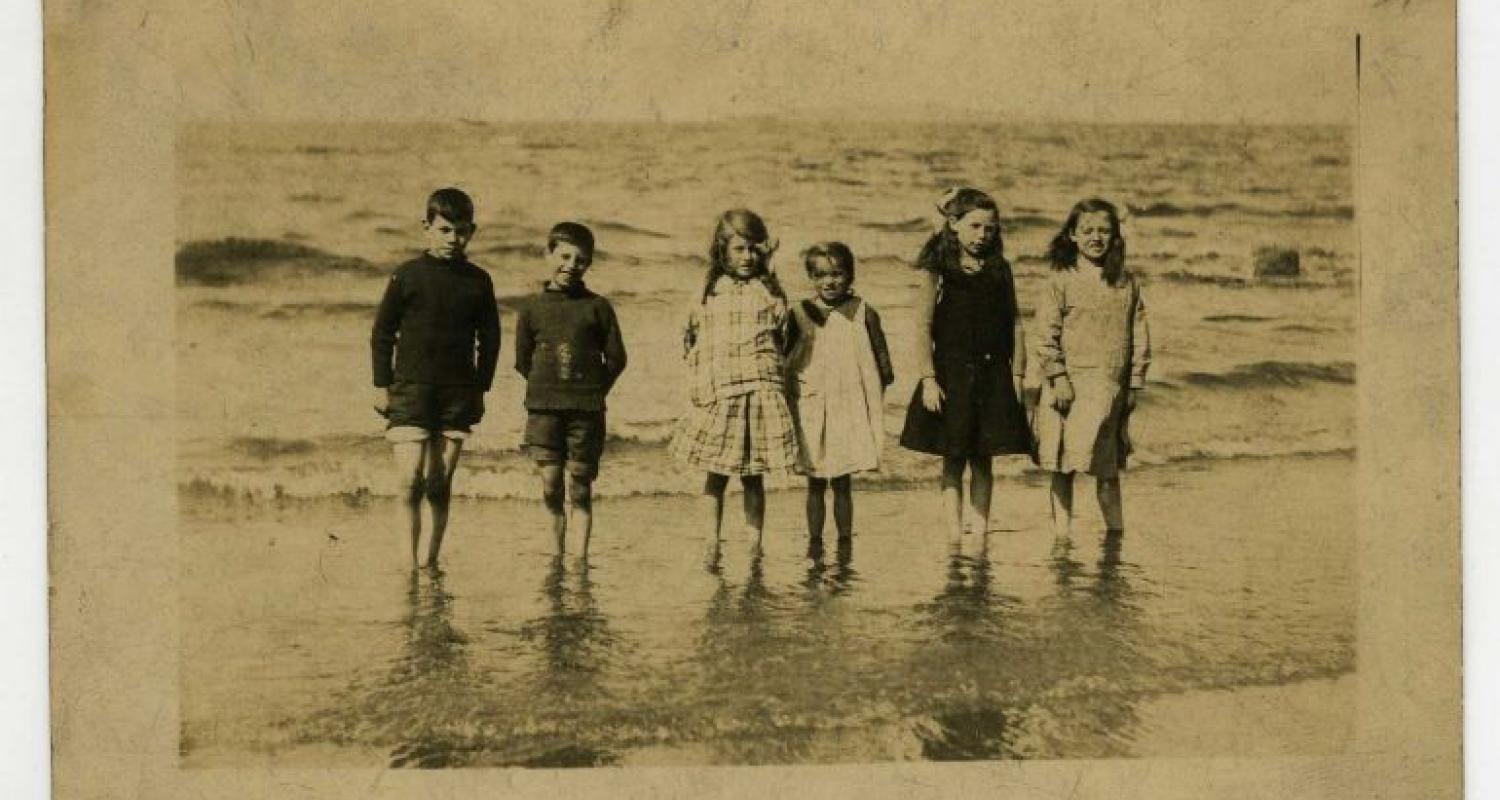 In June 2021 the Auld Reekie Retold blog explored a mystery box of photographs from a house in Newhaven depicting the Crawford Family. Applied Art Curator Helen Edwards had been researching the pictures during lockdown restrictions using online census records. Her work had uncovered a network of family relationships, but Covid rules prevented her from physically meeting with anyone who might be able to shed light on the photographs.

Collections Engagement Officer Russell Clegg picked up the trail once the blog went live and meeting in person became possible. This led to a flurry of community activity and meetings which brought new information forward. A more detailed picture of the Crawford family began to emerge. In this blog, Russell explains the process that led to the new discoveries, and how they add to our picture of the Crawfords and Newhaven.

In the final part of her blog on the Crawford Family photos, Helen made a tantalising suggestion: ‘Perhaps this blog will spark some memories and we can add to their history?’

How could I resist wanting to follow this up, especially as we were moving towards a time in the Summer and Autumn of 2021 when small scale activities with the public were beginning to resume?

Museums and Galleries Edinburgh have good links with the Newhaven Community, and we had the idea of producing facsimiles of the Crawford photographs which could be deposited with Newhaven Heritage Centre at their ‘drop-in’ Police Box near the harbour.

Dougie Ratcliffe from Newhaven Heritage agreed to meet me there for the handover of two folders of images and to have these available when folk dropped by on his Saturday mornings at the Police Box. Dougie would also be able to circulate the folders to local experts on Newhaven history who lived in the community. 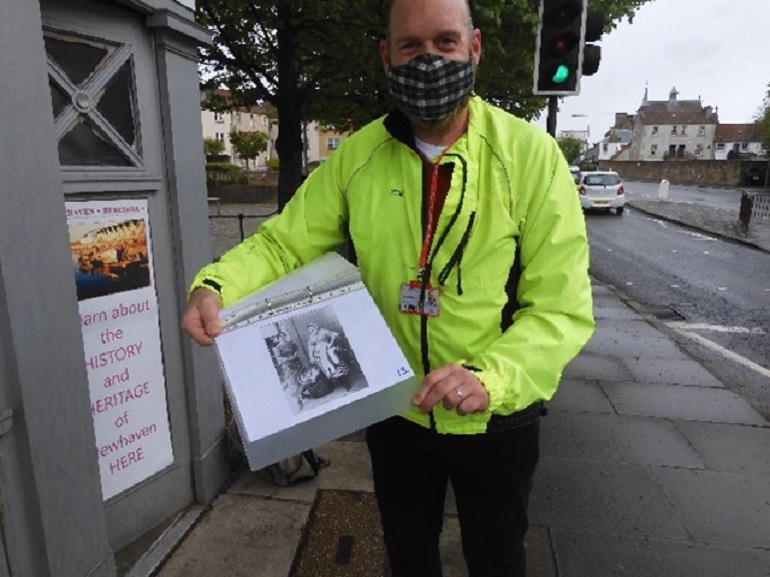 Russell Clegg handing over the photographs to Newhaven Heritage 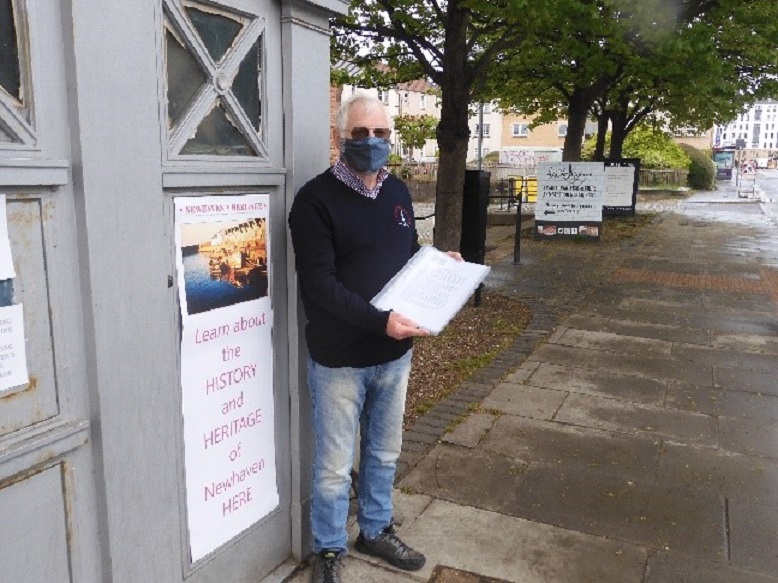 Why do it this way? Although online sessions were popular during the pandemic restrictions, this wasn’t deemed appropriate for our purposes. We wanted folk to be able to see the images close-up and to annotate them if required. Not everyone we were trying to reach out to was necessarily able to engage digitally. To discover more about Grace and her family we had to ‘return’ the photos back to their home community.

In addition to meeting Dougie, I wrote a post on the Bow Tow Facebook page, which serves the Newhaven community and its diaspora, raising awareness of our activity and linking readers to the original blog.

By late summer 2021 we had a breakthrough. Descendants of Jean Crawford, Grace’s younger sister, had seen the Facebook post and met with Dougie at the Police Box to view the scanned photographs. Aileen Watt and her daughter Chel Rennie, respectively the granddaughter and great-granddaughter of Jean, were keen to see the original collection of images and in September they met with me at the Museum Collections Centre for a ‘story-catching’ session around the Crawford photo cache. 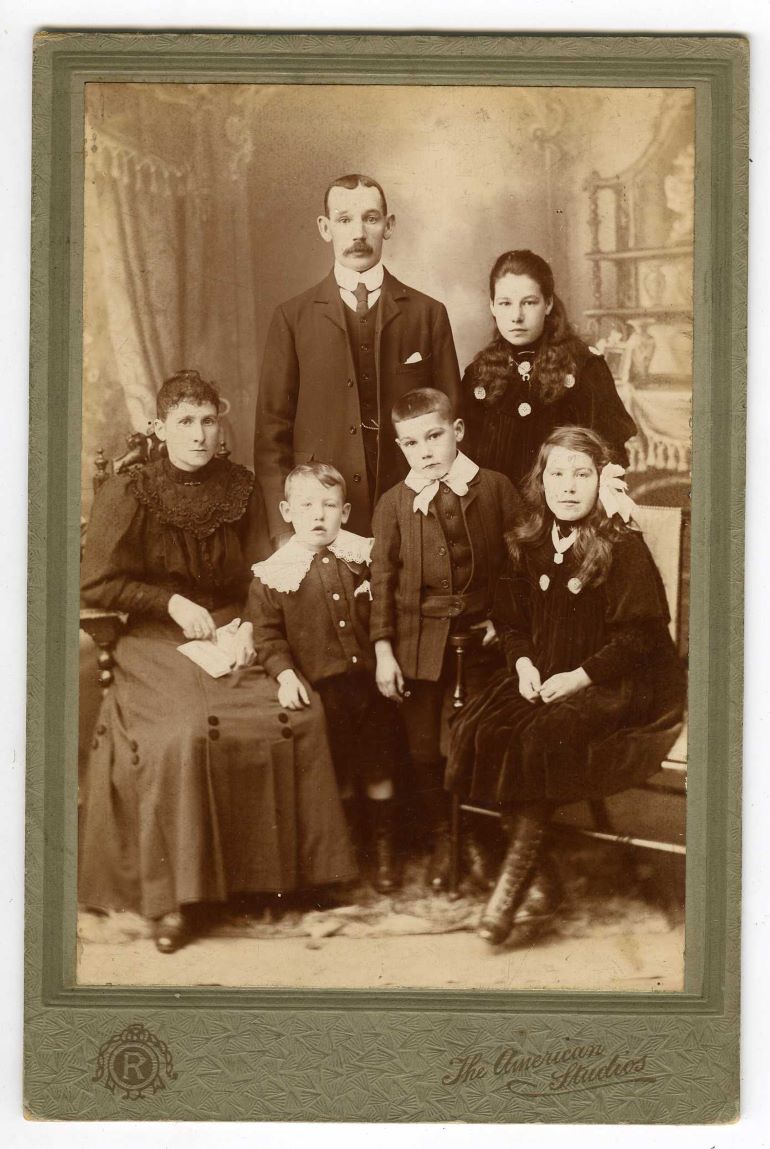 This photograph of the Crawfords shows them minus their final child, Jean, who was born in 1910. Aileen was able to tell me more about John Carnie Crawford, the head of the family, and his Leith-born wife Jane (Jean) Somerville. He was known as ‘Jock’ to friends and family and worked as a coal trimmer, sizing and levelling the coal whilst it was in a ship’s hold – a dangerous job by all accounts. Mother Jean, although not formally employed as such, officiated at births and deaths in the community – helping her neighbours in times of need.

Aileen understands that Jock lived at 16 Parliament Square, a property which had been divided into flats. The Crawford’s flat had been owned by a relative, Robert Carnie, and later in their lives both Grace Crawford and her elder sister Meg (or ‘Meggie’, not ‘Maggie’ as previously thought) occupied a flat each at the same property.

As happened to many Newhaveners, both Meg and Grace were relocated to Granton when the properties were scheduled for demolition in the 1970s. Aileen believes that the property which Meg and Grace occupied still stands and that the cache of photographs must have belonged to Meg Crawford and was left there after she had moved out. 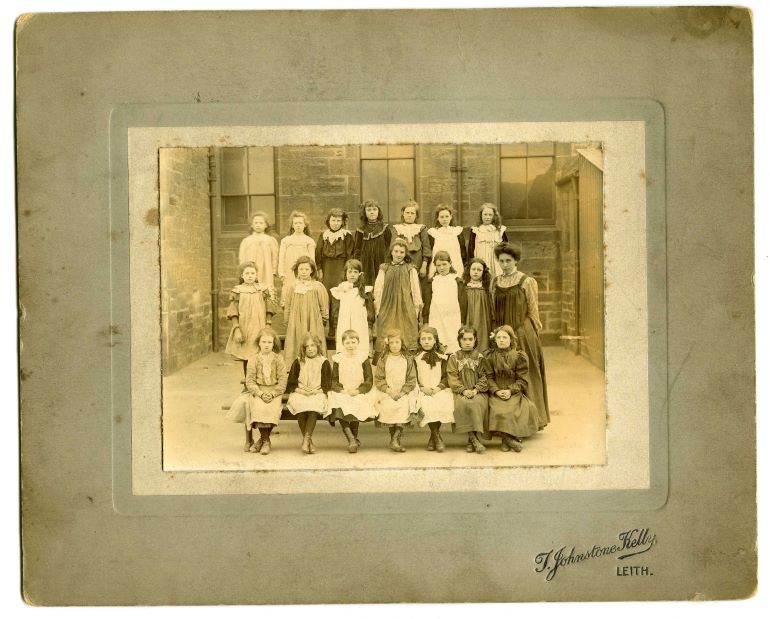 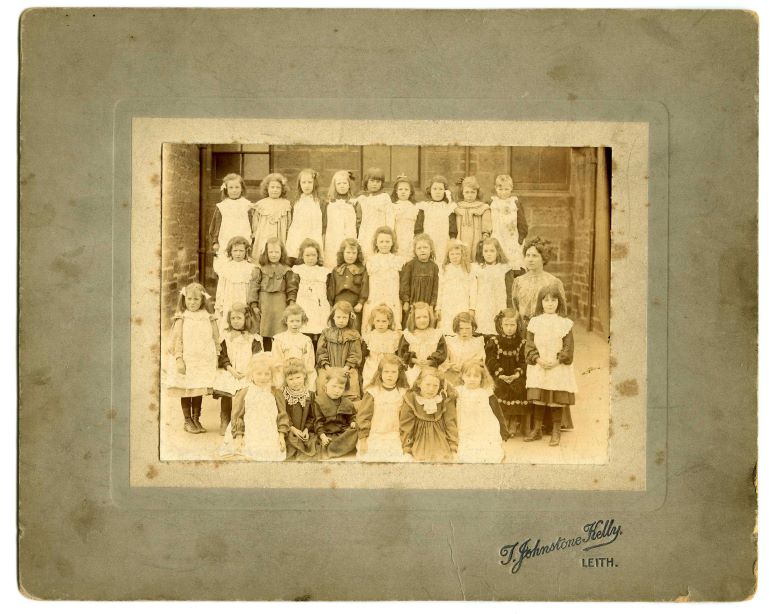 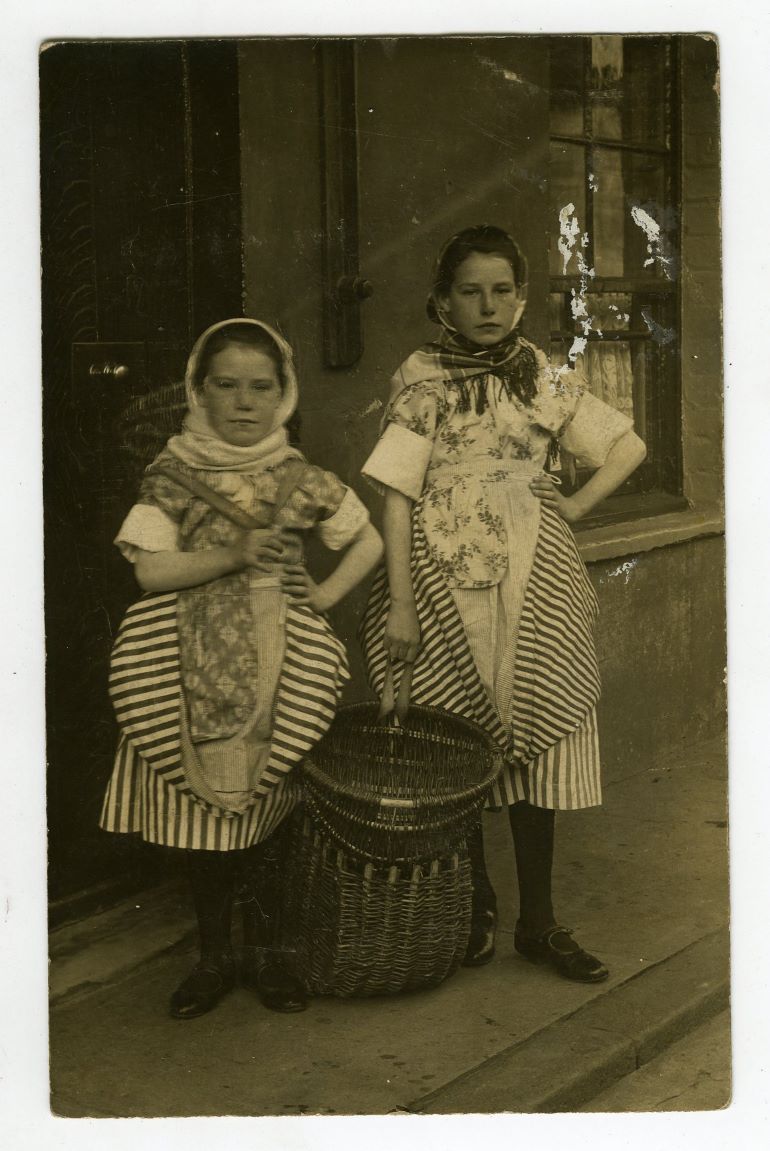 Our conversation turned to the Crawford children in later life. The image above shows Meg, on the right, and sister Grace in traditional fishwives’ costume. Meg went on to sing in the Newhaven Fisherwomen’s Choir as an adult. She worked in the Bell’s whisky bond in Leith and as a favourite treat, Aileen recalls ‘Auntie’ Meg taking her to the café in Jenners’ Department Store to eat ‘Snowballs’!

In the first blog, Helen Edwards mentioned the challenges of identifying those pictured in the photographs and how they were related, especially if they had been annotated incorrectly. A mystery regarding the two images below was solved by Aileen and Chel. Helen surmised correctly that the first photo was indeed Jean Crawford, Aileen’s grandmother. The second sitter is not a Crawford at all! According to Aileen, this is Jean’s best friend Peggy Pruce therefore solving the question around the girls’ ages, which would have been similar when the photos were taken. 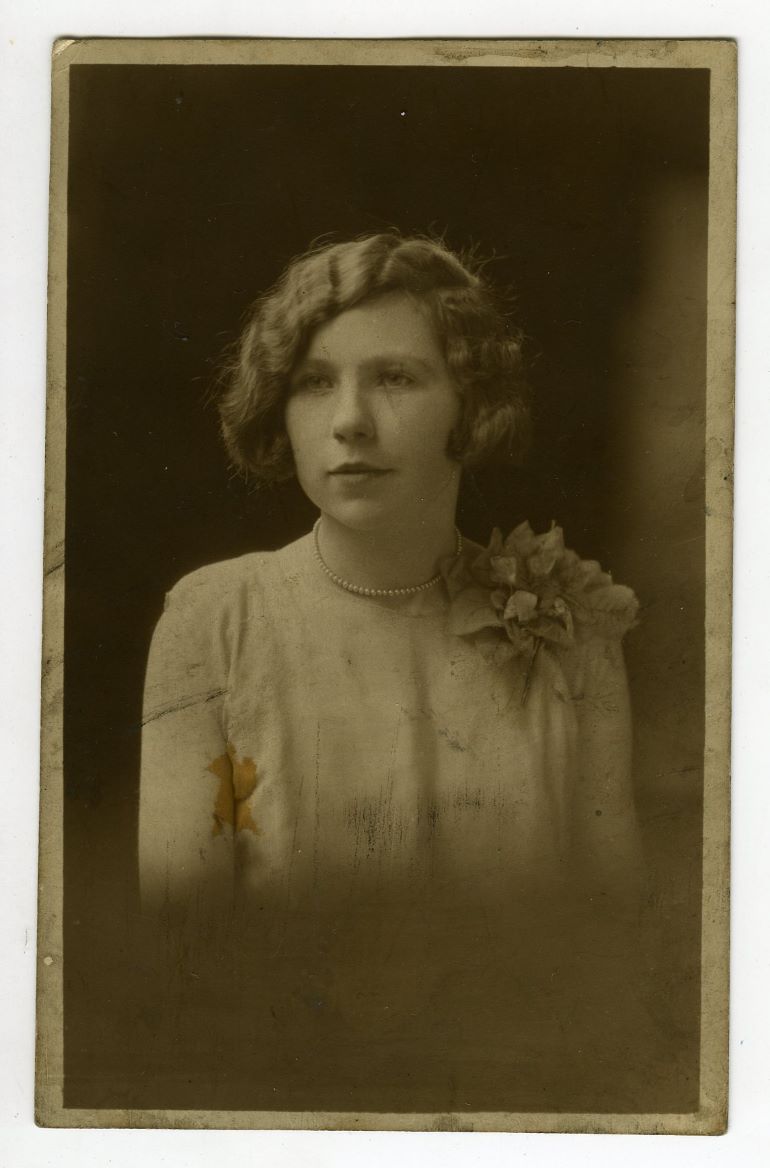 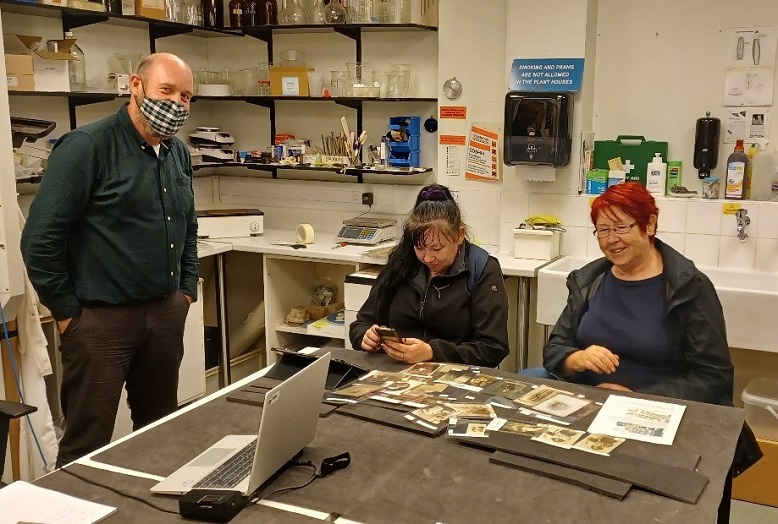 The ‘story catching’ session was a fascinating exploration into the narratives surrounding the Crawford Family photographs and demonstrated how collections come alive when folk can gather together and share insights and information. We may not have found all the answers posed in the first blog, but the memories shared painted a vivid description of Grace and her siblings, and gave voice to their lives.