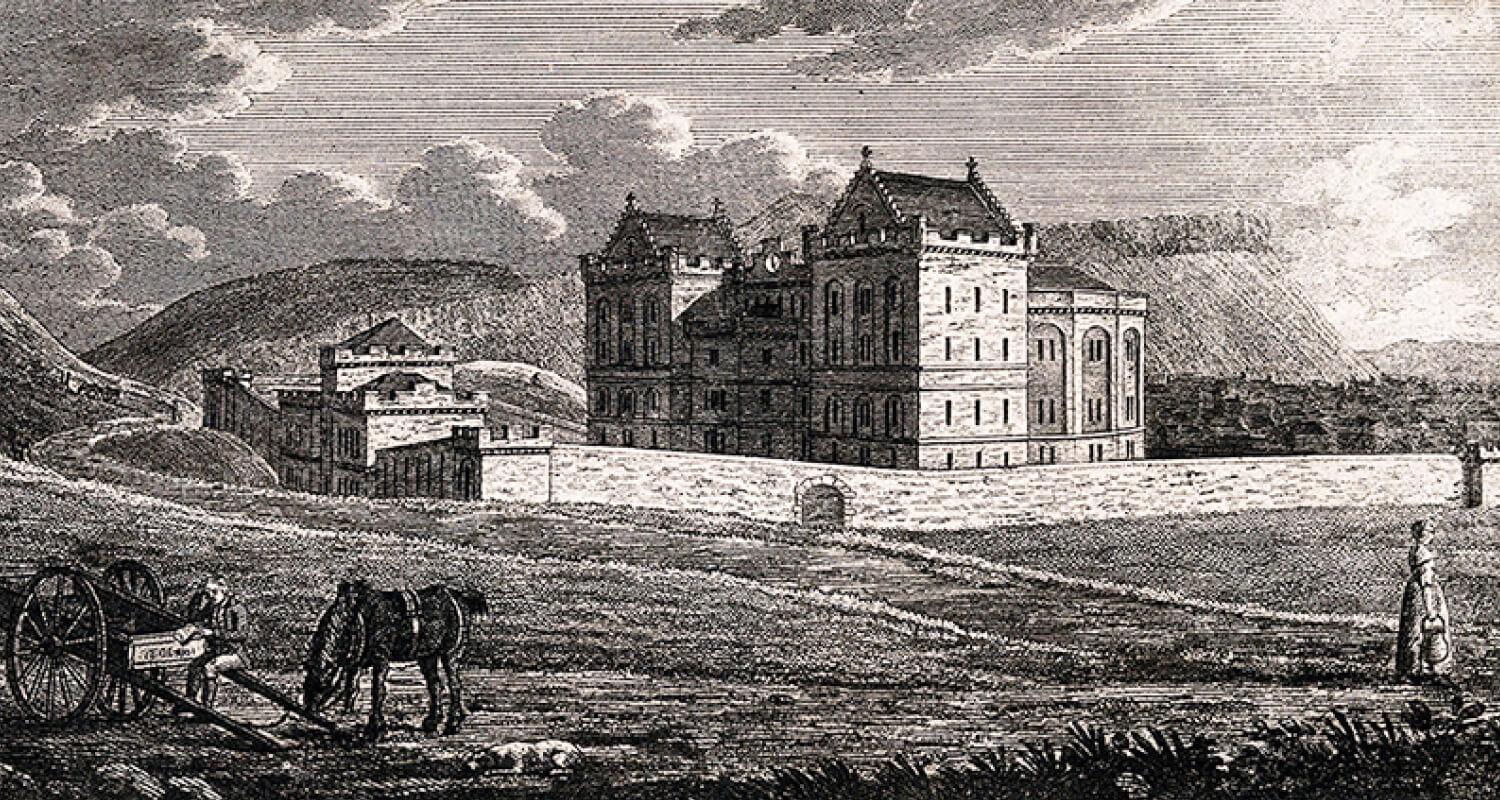 The Edinburgh Bridewell and its hidden treasure

Calton Hill is well known as the site of the former Calton Jail, opened in 1817 and at one time the largest prison in Scotland. However, the lesser known Edinburgh Bridewell, or jail for petty offenders, had stood on this site for almost thirty years before Calton Jail opened its doors.

By the mid-18th century, capital and corporal penalties were gradually giving way to incarceration as a preferred form of punishment. In Edinburgh at this time, building of the New Town was well underway and town officials wanted to project an image of Edinburgh as a modern and enlightened city, but it was becoming clear that existing prison facilities were hugely inadequate and undermining of this effort.

The main prison was the Tolbooth located on the High Street at the North West corner of St Giles Cathedral. An ancient, run-down building known for its insanitary, overcrowded conditions and a general embarrassment to the town. 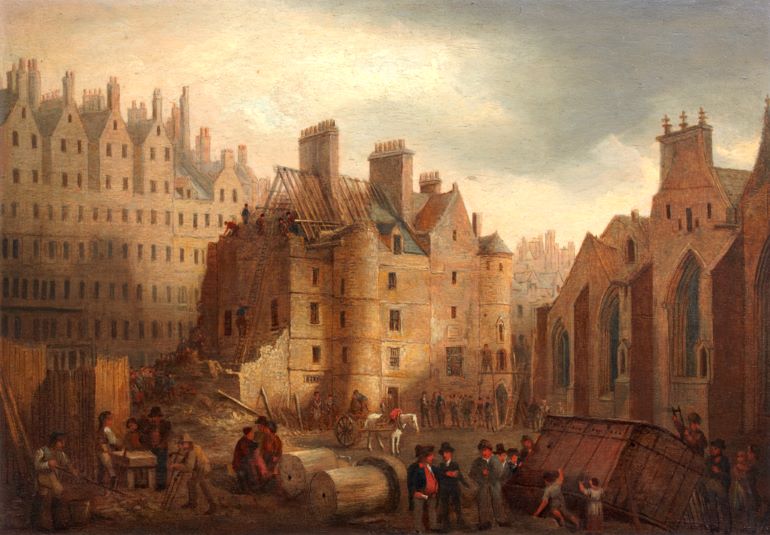 As the number of offenders serving prison sentences increased, so too did pressure on the existing prisons. An influx of those being convicted of political ‘crimes’ in the wake of the outbreak of the French Revolution exacerbated the problem and it was feared that in the close confines of an overcrowded prison, these prisoners could spread their ‘dangerous’ ideas of liberty, equality and fraternity to other criminals.

Faced with these fears and bolstered by pressure from the growing Prison Reform Movement, a solution was sought. Throughout the 1780s early attempts were made to design a new facility and plans were presented by several different architects including James Craig, architect of the City’s New Town, in 1780, and James Brown, designer of George Square, in 1782. However, it was not until 1790 that a petition was made to the House of Commons to bring in a bill for erecting a new bridewell and gaol. This was approved on the 25th of November 1790 and laid out the terms of the type of building and the way in which it would be run and maintained. We have this document within our Museums & Galleries Edinburgh collection. 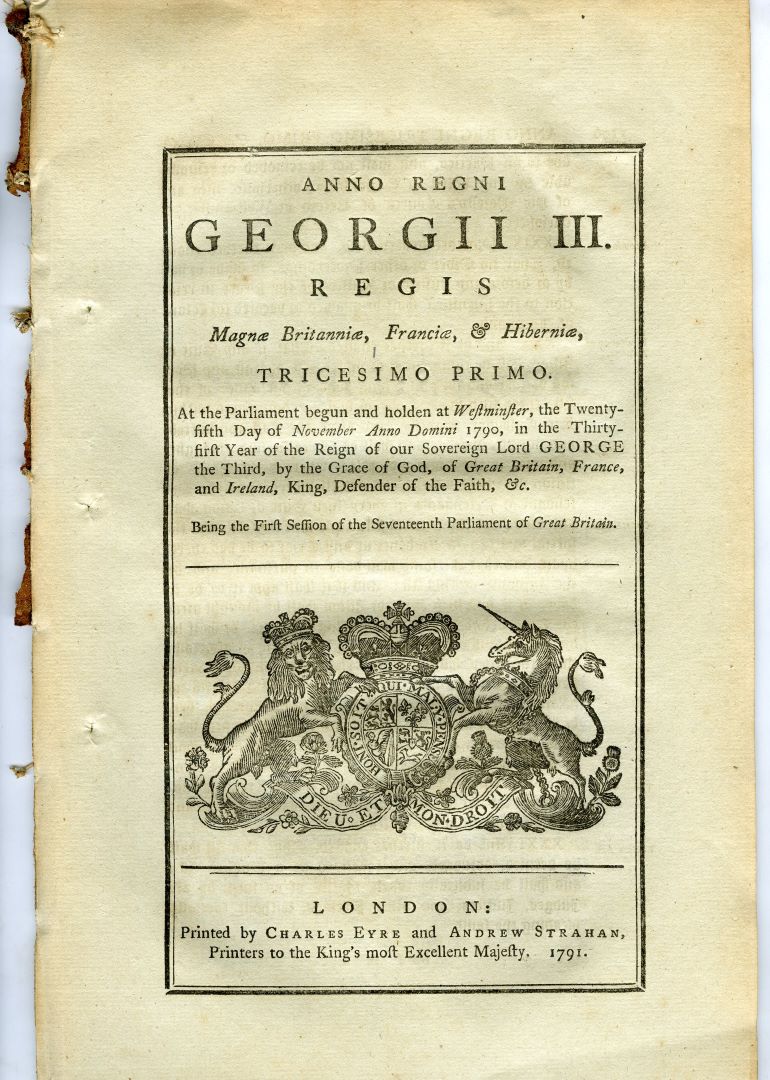 Act of Parliament, dated 25TH November 1790, which contains detailed plans for the building and management of a new Edinburgh Bridewell and Gaol. Image (c) City of Edinburgh Council Museums & Galleries

The prolific Scottish architect Robert Adam was appointed as the designer of the new gaol and bridewell. He presented several elaborate plans for the site including a design to build a bridge linking the Old and New Towns of the City but eventually a less ambitious plan was accepted, and a site was selected on Calton Hill for its construction.

No doubt economic factors played a significant part in the selection of his pared down design and although the 1790 Act of Parliament set out plans to build a Bridewell, a house of correction and a prison, only the Bridewell was constructed.

The foundation stone for the Bridewell was laid on 30th November 1791 accompanied by a grand procession and full masonic honours, and building work was completed in 1795. As part of the laying of the ground-breaking ceremony two glass time-capsules were laid into the foundations. One contained coins of the reign and the other local newspapers and names of city magistrates.  In February 1883, when work was being undertaken at the Calton Jail site, workmen unearthed the Bridewell foundation stone and one of the time-capsules.

A handwritten letter in our collection from J. B. Collinson, architect, dated 8th February 1883, and signed by A. Beatson Bell, Chairman of H.M. Prison Commissions for Scotland, explains the circumstances when the time-capsule was discovered and states that the Earl of Roseberry, who was under-secretary of State for the Home Department, instructed that the stone and its contents were to be replaced. The stone and its contents were rediscovered when the Bridewell was demolished in the 1930s and at that point were acquired for our collection. 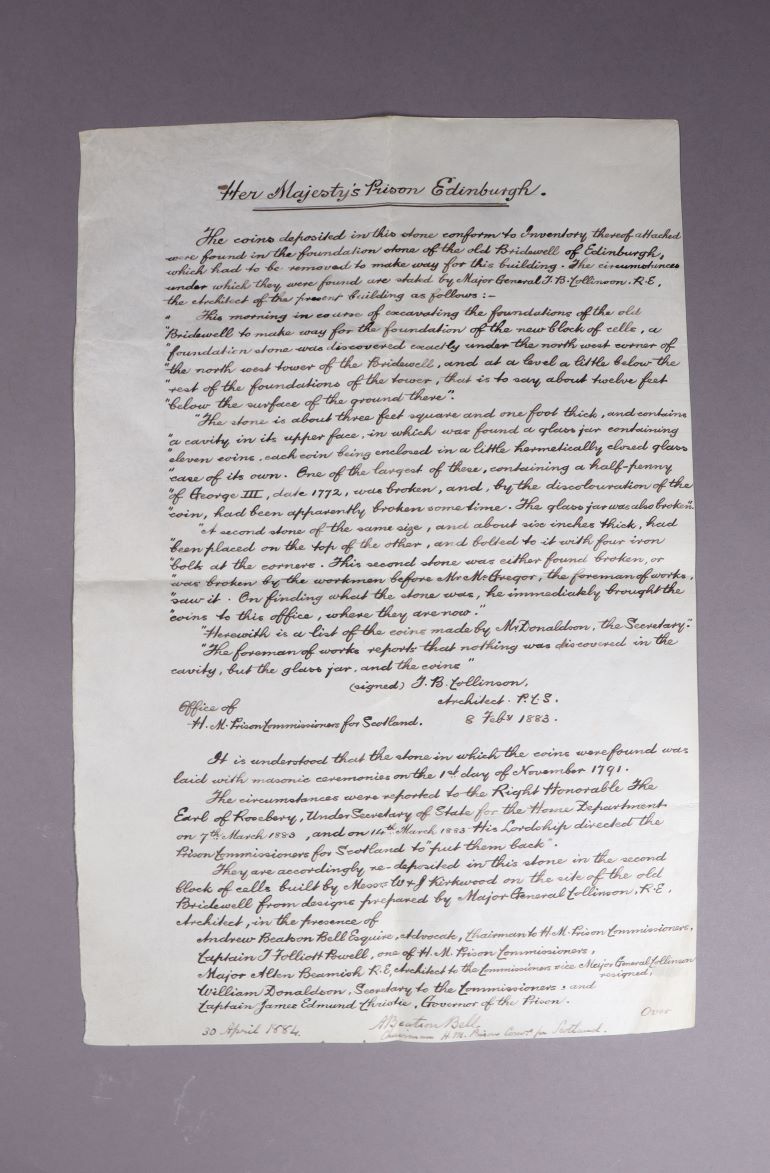 The letter refers to eleven, glass-encased coins, however, there are only seven in our collection and it is unknown what happened to the others. Some have survived in better condition than others. As far as we know, the other time-capsule has never been recovered. 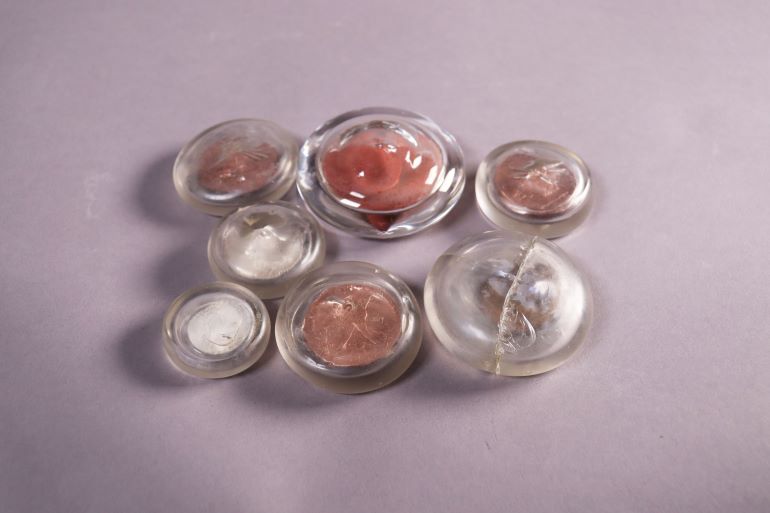 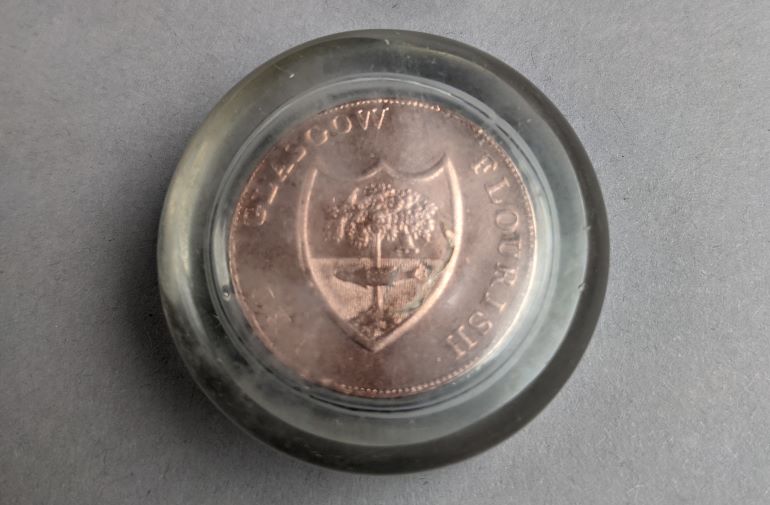 One of the two best-preserved coins in the time capsule. Image (c) City of Edinburgh Council Museums & Galleries 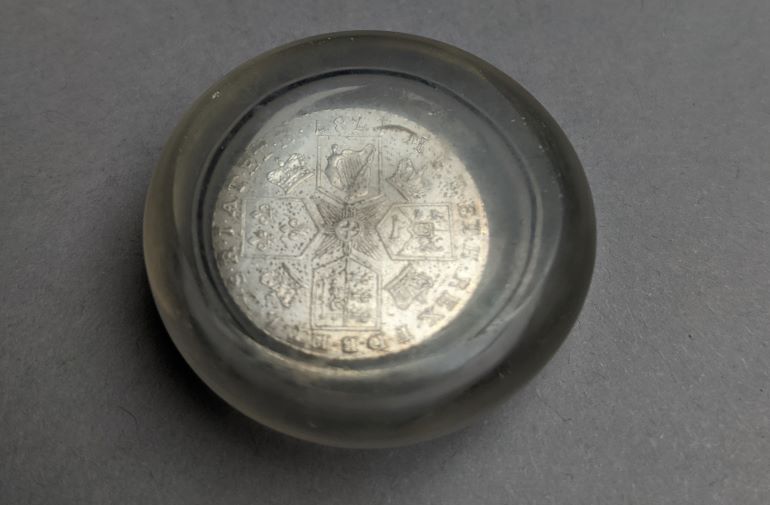 The second of the two best-preserved coins in the time capsule. Image (c) City of Edinburgh Council Museums & Galleries 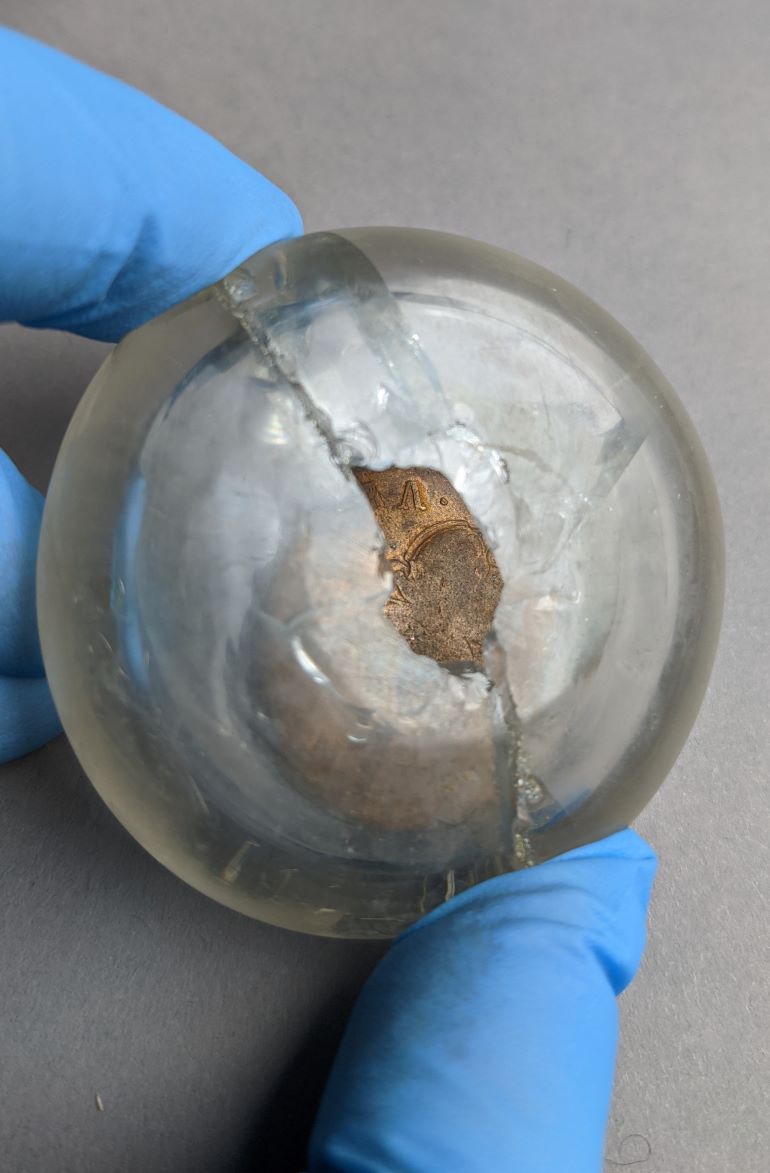 The Bridewell was Scotland’s first ‘new’ penitentiary where facilities and treatment of prisoners were far removed from those of the dilapidated and overcrowded old Tolbooth. This new model prison put prisoners to work in activities such as spinning and weaving, and the sale of this work helped to pay for the prison. The Bridewell and its surrounding site were remodelled and extended throughout the 19th century, becoming part of the Calton Jail facility until the site closed in 1927 and all the buildings, except the Calton Jail Governor’s House, were demolished in 1935 to make way for the construction of St Andrew’s House.

You can see more images of the Bridewell and Calton Jail. from our collection online at www.capitalcollections.org.uk

Auld Reekie Retold is a major three-year project which connects objects, stories and people using Museums & Galleries Edinburgh’s collection of over 200,000 objects. Funded by the City of Edinburgh Council and Museums Galleries Scotland, the project brings together temporary Collections Assistants and permanent staff from across our venues. The Auld Reekie Retold team are recording and researching our objects, then showcasing their stories through online engagement with the public. We hope to spark conversations about our amazing collections and their hidden histories, gathering new insights for future exhibitions and events.